Book:  A River to Cross 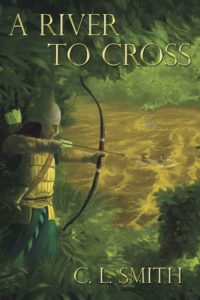 Although human eyes see only a river separating Israel from the Promised Land, primordial powers of darkness are determined to prevent a crossing that will change the world.

In the thrilling sequel to Balaam’s Curse, Acsah, Othniel, Jonathan and their friends sort through the rubble of the Midianite war for pieces of the simple and innocent life they’ve lost. But there is no going back. While nearly drowning in personal rivers of disappointment, grief, and fear, they hardly notice the Jordan River slowly rising to an impassable, raging torrent. By the time they do, Moses is dead. Yahweh has made it clear that Joshua is his chosen replacement, but the people have little faith that this hesitant man can lead them into Canaan.

To bolster confidence, Joshua sends Salmon and another young spy across the river in a reconnaissance mission that plunges them into a world where evil prowls in broad daylight and death waits in the darkness. They escape the depraved city of Jericho only by the quick thinking of a Canaanite girl who risks her life in exchange for a promise of rescue. Now her life and the future of the world depend on crossing that river. 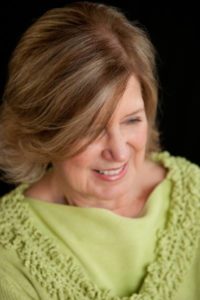 C.L. SMITH, former missionary and junior high English/history teacher, has been captivating audiences around the world for years with the timeless thrill of biblical tales. Now in her retirement years she is writing The Stones of Gilgal biblical novels. The books weave her lifetime love of learning and people into the fabric of obscure ancient texts, creating an unforgettable tapestry of rich scenes and colorful characters.

The narrative unfolds from the viewpoint of six minor biblical characters who experienced the miracles and mayhem of the era of Joshua (stories recounted in the last half of Numbers through parts of Judges) bringing this ancient world to life. This deeply-researched telling, of old stories makes them new again and relevant to our world today. She has completed three of six books in the series. The books are chronological, each adding layers to our understanding of the characters and their life situations, but each book can be enjoyed as a story complete within itself. 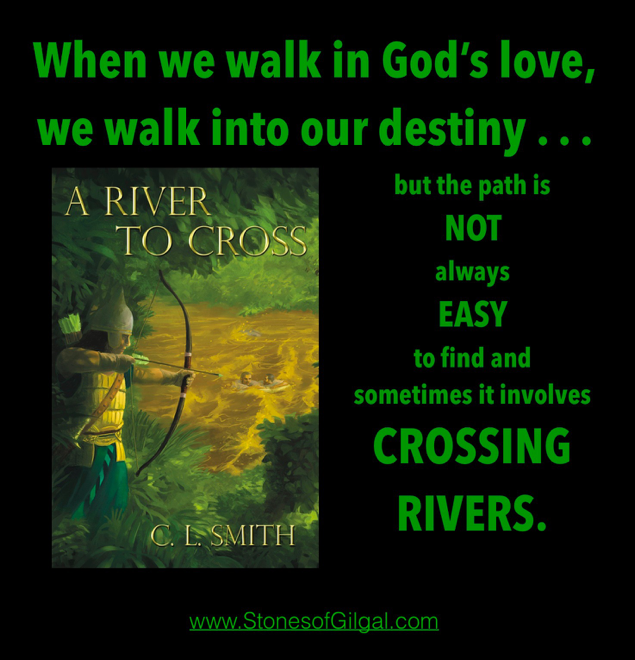 Have you ever wished you had good answers for people who ask those questions?

Imagine a story that deals with those questions and reads like the high adventure of an epic fantasy novel. Well, you don’t have to imagine. The Stones of Gilgal novels tackle those tough questions.

A River to Cross is the second book of The Stones of Gilgal series––but plunge right in! Each book can be read as a story complete within itself.

Background from book one: The children of Israel celebrate their arrival at the border of Canaan, their long-awaited Promised Land. But the evil prophet Balaam has been hired to stop them. His plot turns their joyful celebration into a nightmare. Balaam’s Curse threatens the very existence of God’s people on earth, leads to the death of the last of the Exodus generation, and leaves their children reeling.

Setting for book two: The crisis is past. Acsah, Othniel and friends begin picking up the pieces of their shattered lives. Their parent’s generation is gone, but against all odds, they survived the rebellion, plague, and war initiated by Balaam’s Curse. Like a loving grandfather, Moses gathers his people together for his final words. He reviews the covenant law and appoints Joshua as their new leader. The people grieve the loss of their mountain of strength. But inspired by the passion of his farewell speeches, the people look to the future with fiercely bright hope. They will cross the Jordan and claim their inheritance. What could possibly go wrong?

Six of the major characters in this series are minor but real people found in scripture. They all came of age during the era of Joshua, experiencing the transition from the Wilderness Wanderings to finding a home in the Promised Land. They all crossed the Jordan, witnessed the fall of Jericho and the sun standing still at a word from Joshua—life-changing events shaping them for leadership roles as mature adults in the book of Judges.

Of course, any biblical author’s dream literary pilgrimage would be to the Holy Land. I truly hope someday to see with my own eyes the places where the action in my stories happened. My dream would be a month’s long, tailor-made tour with a private guide.  The scenes of the Stones of Gilgal novels are quite varied. The stories are set along the Jordan, in the cities, valleys, and even the caves of the mountainous backbone of central Canaan. My primary characters will eventually settle in the drier lands of the south, but the final book will take us to the city of Dan at the foot of Mount Hermon in the north where mountain springs give birth to the Jordan River. I have been reading books and on-line articles about these places for years now and researching the geology, plants, animals, and seasons of Palestine.

Back when my idea for a novel about Othniel was still just an idea, I was telling my pastor, Jim McMurry about it. He immediately pulled a faded old book off his shelf, The River Jordan, by archaeologist Nelson Glueck (1946). The poetic descriptions in that book really sparked my imagination and stirred up a love for the physical setting of my stories. Interestingly, the fact that this book is so old made it invaluable. For thousands of years changes to the ancient land of Palestine were minor. Then in 1948, Israel became a nation. Suddenly, rapid development brought tremendous change to the appearance of the land. Glueck’s old black-and-white photos, as well as his descriptions, are much more helpful for visualizing the setting as it might have been 4000 or more years ago than more recent ones.

If research books on the Holy Land sound boring, I hope the result of my research is not. I want to be your virtual tour guide to the Bible lands. I hope every vivid visual image enhances your understanding of the story. And I hope you remember those places later when you see them in your own Bible reading. With the exception of times of exile, most of the stories of the Bible take place in a very small set of cities, mountains, valleys or rivers. The names come up over and over. This is the same ground where God created Adam and Eve. It is the land bequeathed to the descendants of Shem by his father Noah after the flood. It is the land of the patriarchs, Abraham, Isaac, and Jacob. It is the Promised Land reclaimed by Joshua for God’s chosen people. And in the climax of the Great Cosmic War between good and evil, this was the very place where God himself came to earth as Jesus. This is not a place of ordinary dusty history. It was the epicenter of the battle for Planet Earth. There could not be a more exciting setting for a story.

Honestly, I spent far more of my solitary childhood hours swaying in the top of one of the tall eucalyptus trees on our property than reading. I do remember one summer nearly wearing out a beautifully illustrated copy of Little Women, reading and rereading, hoping somehow the plot would change and Jo would marry Laurie. As a romantic kid, I couldn’t see that it would have been a disastrous match.

I read a lot of books to my own children. My favorites were The Chronicles of Narnia—every book in the series. Perhaps The Magician’s Nephew or The Silver Chair if I had to choose one, but it’s not an easy choice. Every adventure is plotted with page-turning excitement while the spiritual lessons are profound. I was amused and pleased once when a man picked up Balaam’s Curse and only half seeing the author name, C. L. Smith, mumbled, “I didn’t know he wrote about Balaam–– Oh! For a minute I thought this said C. S. Lewis.” I hope my books, like the wardrobe in the Narnia series, can be a door to an equally delightful world for my readers, the ancient realm of Bible stories.

Which comes first plot or character?

The basic story, of course, is already set in scripture. I am very careful not to ignore or change any biblical facts. But those accounts are often incredibly brief. They are my story outline. The plot thickens as I study and think about each scene. What led up to that particular event? What might have motivated the characters to do what they did? What other obstacles and difficulties did the characters have to face?

A River to Cross includes the story of Rahab and the spies. The account in Joshua 3 simply states that Joshua sent the spies from the Valley of Acacias to Jericho. It doesn’t mention the flooded river! Only a few days after the spies’ return, it took an astounding miracle for the Lord to get his people across. How did the spies cross? That obstacle had to have been huge. Especially for young men who grew up in a dry, barren wasteland. The adventure of crossing over to Canaan as well as the return became entire chapters in this book. In the Bible story, we are given a fair bit of detail about Rahab helping the spies escape from Jericho, but what about the three days hiding in a cave? Just quietly waiting it out? Or were there some frightening moments while the king’s troops were searching for them? I had fun researching caves and writing about those three days.

Who is the author you most admire in you genre?

My genre is a fuzzy mix of historical biblical fiction with a fantasy flavor. I was quite inspired by Tolkien when I first started writing this story. I want to show, as Tolkien does so well through the hobbits, how a group of weak, faulty people defeat the powers of darkness. I believe supernatural forces, good and bad, are real––and both are a real part of this story. Yahweh communicates audibly at times. I show the Cloud above the tabernacle as well as the Shekinah glory over the Ark of the Covenant with a degree of personality, living visuals displaying God’s favor or disapproval.

The demonic forces are just as real. If you read reports from missionaries in primitive places, you know demons make themselves known in frightening ways. (But, of course, God is always stronger!) The weird scene in A River to Cross where an apparition of Baal appears to Rahab in prison was inspired by a story from a mission magazine. It seems fantastical to us, but a very similar thing really happened in one of the dark places of the world. Similarly, the incident where a “Voice” tells the little Midianite girls to wait in the temple is based on another story from a mission magazine.

Thank you, C.L. Smith, for your time in letting us get to know you better!

For the Love of Literature, June 18

For Him and My Family, June 29

To celebrate her tour, C.L. is giving away the grand prize of a $50 Amazon gift card!!