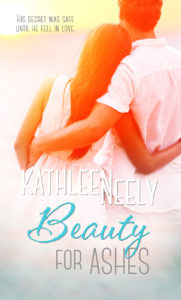 Nathan Drummond’s actions at the age of eighteen had devastating consequences. Writing became therapeutic, leading him into a successful career as a mystery writer. With seven novels to his name, Nathan is rapidly becoming a household name.

When family responsibilities force him to return to his home town, he meets Angie Hernandez. Nathan doesn’t count on falling in love, and certainly not with a woman who has the power to shatter his peace.

Being at home pushes him too close to painful memories, and as guilt threatens and panic attacks set in, Nathan begins to write a novel paralleling the tragic event from his youthful folly.

Will the novel be seen as a work of fiction, or will it expose his secret and threaten his future?

Beauty for Ashes is contemporary Christian fiction by Kathleen Neely. It is a beautiful yet heart wrenching story of forgiveness and redemption. It is a story of how a man must face the mistakes of his past before he can face the future.

Nathan was in a drunk driving accident when he was 18, as a result of this accident a man died. Nathan has never accepted responsibility

Neely has written a beautiful story. When Nathan returns home he has to face a past that he has been running from. It was nice to see him as the man that he had grown into. I loved how he connected with the students at the Harold Centre. I enjoyed how Neely used the centre in the story. The students from the center were heartbreaking to read about at times, but brought depth and realism to the story. Angie was also a wonderful character,  I love her strength and determination.  It was very neat to start reading a book only to realize that it is set very close to your hometown. I enjoyed most of the descriptions of Greenville, SC.  This is the first book that I have read by Neely, but I would not hesitate to read another. 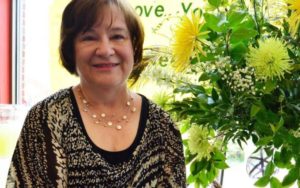 Kathleen Neely is the author of The Street Singer, Beauty for Ashes, and The Least of These.  She is a former elementary teacher. Following her years in the classroom, she moved into administration, serving as an elementary principal at Eden Christian Academy in Pittsburgh, PA and at Shannon Forest Christian School in Greenville, SC. Kathleen is an alumnus of Slippery Rock University in Pennsylvania and Regent University in Virginia.

Among her writing accomplishments, Kathleen won second place in a short story contest through ACFW-VA for her short story “The Missing Piece” and an honorable mention for her story “The Dance”. Both were published in a Christmas anthology. Her novel, The Least of These, was awarded first place in the 2015 Fresh Voices contest through Almost an Author. She has numerous devotions published through Christian Devotions. She continues to speak to students about writing. Kathleen is a member of Association of Christian Fiction Writers.

She resides in Greenville, SC with her husband, two cats, and one dog. She enjoys time with family, visiting her two grandsons, traveling, and reading.

I’ve always been an avid reader, but began writing at a period in my life when I didn’t have time to commit. While raising three sons, I also worked full time as a teacher, then later as an elementary principal. That left little time for writing. I’d plug away at my manuscript then neglect it for months. Those months became years. Every now and then, I would pull it out, re-read it, then add a little to it. When retirement approached, I thought of that old, abandoned manuscript. That’s when I began to take writing seriously. I joined a writing group, attended conferences, and met with two other writers weekly to critique and be critiqued. That manuscript is now a published novel.

I truly love writing. I can get lost in my own thoughts when planning a story. Characters become real and take on their own personality, sometimes different than I originally intended. Nathan, the protagonist in Beauty for Ashes, is a novelist. This excerpt is scripted from the book as he attempts to explain his trade with Angie. His explanation describes my approach to writing.

Excerpt: “They’re real people. I have to make myself become them. My mind lives out each scene. What would they feel? How would they react? I’m an actor playing a role, except that I have to play each role, each character. I immerse myself completely, then find words to capture it.”

I hope you’ll visit the pages of Beauty for Ashes and meet Nathan. He loves writing as much as I do, but hides a deadly secret. His past triggers challenges that leave him with debilitating anxiety and panic attacks. Writing has always been a balm for Nathan—until he writes his own story.

For the Love of Literature, April 26 (Author Interview)

For Him and My Family, April 27

Blossoms and Blessings, May 2 (Author Interview)

Artistic Nobody, May 3 (Guest Review from Donna Cline)

To celebrate her tour, Kathleen is giving away the grand prize of a copy of the book!!