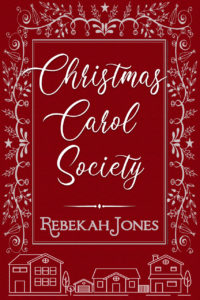 Christmas Carol Society – How Do You Impersonate a Christmas Ghost?

The Christmas season has arrived. The members of the newly-formed Christmas Carol Society are beginning their weekly meetings. Charlie Baker finds the first meeting odd enough, but when the assignments start, he has to wonder why he allowed himself to get roped into attending. Miss Dartmoor tells her members to impersonate the Ghost of Christmas Past for their own personal Scrooge.

Just how does a mere human accomplish such an absurd task? Charlie tries to figure it out, but begins to see the Lord might plan for the assignments to have a deeper impact on him than he expected.

An impact that Charlie isn’t sure he wants to face.

What an interesting twist on a classic. Joining the Christmas Carol Society opens the members to new friendships and challenges. The firm faith exhibited throughout the story only adds to the tale. Fans of Charles Dickens Christmas Carol will really enjoy this book.

This book was provided to me through Celebrate Lit for me to read. The opinions expressed are my own. 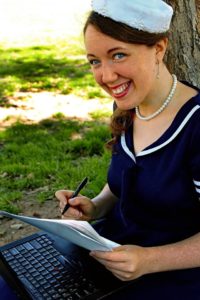 Rebekah Jones is first and foremost a follower of the Living God. She started writing as a little girl, seeking to glorify her King with her books and stories.
Rebekah is an old soul in a young body (she’s not 12 —honest!) While her exact age is classified, her interests are not. Among them are reading a variety of books, singing, playing, and composing music, studying all manner of subjects, nannying an adventurous group of youngsters, and, of course, writing her books, poems, articles, and short stories. She writes a wide range of books from gentle children’s adventures to family sagas to murder mysteries.

Christmas Carol Society is a book very near and dear to my heart. Partly because of Charles Dicken’s A Christmas Carol, which is among my favorites, and partly due to my characters. Especially, Charlie Baker.

Charlie is very special to me. He wants to hide in his tiny corner of the world, and give up. He wants to give up on a world that has hurt him tremendously or taken people he loved. He wants to push away any possibility of repeating the past; he doesn’t want to be hurt again.

He joins because he loves his cousin. He doesn’t do it for any other reason.

His father encourages him to do it right, if he’s going to do it at all. His cousin calls him out, when his Christianity is at odds with his behavior. And Albert, his would-be friend, just doesn’t give up on him.

In a sense, Charlie is a Scrooge – and yet, he’s not. He has to find a Scrooge of his own. And through it, he finds himself doing all the things that he really doesn’t want to do at all – and it’s a good thing. Painful sometimes, but good. Scary at times, but good.

The characters that the LORD uses to teach me the most, end up being particularly special to me. Charlie is one of them. In some ways, I relate to Charlie rather a lot, and writing this story drove me to prayer often, so I would know what to do next. I frequently wasn’t sure where the story would go. But I learned along with Charlie.

I hope that my readers will love Charlie Baker as much as I do, and that his story, along with the others in this book, will in some way bless and encourage my readers for the LORD’s glory.

To the KING be all the glory!

For Him and My Family, August 29

She Lives To Read, September 2

For the Love of Literature, September 5

Because I said so — and other adventures in Parenting, September 6