Book: Climbing into Eternity: My Descent In Hell and Flight To Heaven 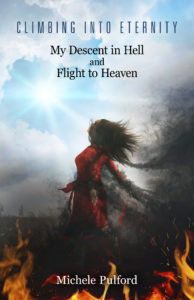 “I died twice and came back to tell about it.”

Michele flirted with death for six years, trying to numb her pain following a sexual pervert’s attack. Attempting to protect herself, she allowed hatred of men to control her, and used mind control to manipulate others. Suffering with acute anorexia nervosa, she was pronounced dead on arrival at the hospital at age twenty-three.

She woke up in hell, a place of eternal damnation, horror, torment, and fire. Rescued by the Savior whose soft, gentle voice she had rejected, Michele was given a new chance at life and turned wholeheartedly to the Lord.

When her body was completely paralyzed from an anaphylactic allergy attack as a young mother, she found life leaving her body once again. “This time,” she says, “I was ushered into the splendorous glory of Heaven—a place of almost indescribable light and love.”

Sent back to tell her story, Michele Pulford warns others of the horrors of the kingdom of darkness, and tells them of the glory of true abundant life in God’s kingdom of light.

This personal love story, as well as a story about death and eternal life, is both a warning and a promise, and ultimately an unforgettable account of the love of God that would not let a young woman go.

Unfortunately, I was unable to finish this book because of the theological issues in it. I read about half of it before I could not continue; if felt wrong to be reading it. Due to this, I am unable to recommend this book to anyone. I know authors put their hearts and souls into their work, so I appreciate her effort in writing and feel terrible that I cannot give her a glowing review. Her story is heart-breaking to read with what happened to her at a young age, but I cannot in good conscience endorse the book.

If you do decide to read it, there are a few things that I feel I should warn you about. One is how negative and hateful she was for the entire portion I read of the book, which was just before the halfway mark. Michele Pulford suffered a horrible attack when she was young and it, understandably, scarred her; however, she describes in such detail how much she hated men and wanted them to suffer. It was so oppressive to read so much hatred with no rays of light. If you choose to read it, you may want to pace it so that you do not find yourself bogged down by the negative thoughts. Another thing I feel that I should warn potential readers about is her belief that demons spoke to her daily and gave her mind powers to harm men mentally. She believes that the demons granted her the power to “zone in and read people’s thoughts” (p. 39). This is a recurring theme in the book; she also thought she was able to use her mind powers to crush men’s spirits. Lastly, she is very descriptive in the attack that happened to her and her subsequent punishments she performed on herself. I think this may be a trigger for those who have been victims of sexual assaults and attacks. This attack is what fueled her hatred for men, and the fear of something like it happening again drove her to be an exercise fanatic so she could be stronger than men. Thoughts of what happened to her and how her senses played a part in it come up in the book a few times, which can cause a person to be very uncomfortable while reading it.

I received a copy of this book from the publisher via Celebrate Lit. I was in no way required to provide a review. 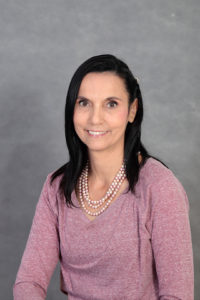 Michele Pulford trained and worked as a fashion designer and textile lecturer from 1982 to 2009. After attending evening Bible school, she was further trained at MES Aksie, an evangelical missions ministry, before doing missionary outreach and relationship building among the locals in the Maghadighadi Pans of Botswana from 1990 to 1996. A marketplace intercessor and teacher on prayer, she makes her home with her husband Charles in South Africa. Their family consists of a son Cyle-jay, his wife Natasha, and grandson, Asher Ethan; and a daughter Brontii-ann.

After a sexual pervert’s attack at ten years of age, I invited evil into my life. I became an embittered, hateful teenager consumed by acute anorexia with murderous hate towards men. This led me into an abusive marriage of two years which ended with a failed murder attempt. Due to my failure I landed up DOA at my local hospital from premeditated suicide. On dying, I was taken to the evil and fiery demon invested accusing, tormenting pit of hell. It was here where the miraculous Light and Life of Jesus ripped through and rescued me.

I began my new life with my best friend, the Holy Spirit. Miraculously I married my high school sweetheart. The miraculous continued when after being declared completely barren, God’s love and grace stepped in resulting with me giving birth to a son and a daughter. Our family joy was shadowed by my soul-destroying bulimic addiction which God’s grace eventually set me free from. The life-death challenges did not end there. I found myself in an intense battle with witchdoctors as well with the dangers of onset anaphylactic attacks. It was one of these attacks that found me dying once again, with my husband and doctor watching. This time I was taken to the gates of heaven and glory. This is my story of life and death, heaven and hell, blessing and cursing.

Spoken from the Heart, January 30

For Him and My Family, February 3

For the Love of Literature, February 4 (Author Interview)

To celebrate her the grand prize of a $50 Amazon Gift Card and ‘signed’ copy of Climbing Into Eternity, My Descent In Hell and Flight To Heaven!!