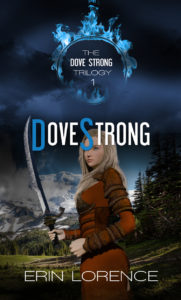 Dove Strong loves God. She loves standing chin up and fists clenched when facing Satan’s attacks. But there’s one thing she doesn’t love—other people. So when this spiritually-gifted, antisocial teenager is chosen to join other believers in a trek across Satan’s territory, rattlesnakes and evil-intentioned Heathen aren’t her biggest challenges.

But failure isn’t an option. In a month, the Christian Councils will decide the Reclaim, a vote on whether there’ll be a war between Christ’s followers and Satan’s to take back America. It is up to Dove, God’s messenger for peace, to reach her Council in time. Because if she doesn’t, things could get bloody. 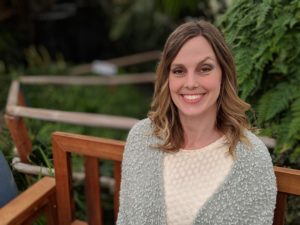 Erin Lorence grew up in rainy Western Washington, an avid reader and the daughter of a published nonfiction author. She attended Washington State University (WSU) where she met and married her husband, Brian. Together, they recently moved to Apex, North Carolina with their two amazing daughters (who also love to read) and their beagle Charlie (who doesn’t read). Her lifelong love of literature, her gratitude to God, and her enjoyment of hiking in Central Oregon all inspired her to write the Dove Strong Trilogy. Visit her at:  www.erinlorence.com.

I politely smile and keep what I really think inside. But my main character, Dove Strong, doesn’t. She blasts people with the full force of her words. Sometimes Dove’s words sting…but she’s never merely polite or hum-drum boring.

I secretly hug the random and ridiculous moments of life to myself, preserving my appearance of normalcy. But when I write, the true ‘uncool’ me escapes. It is responsible for the caterpillar dangling from a character’s nostril as well as for the little sister who won’t stop harping on about her precious bag of chips.

I write to escape and to help others escape. I write to laugh and make readers smile. I write so ‘the lost’ will wake to find that they crave an intimate relationship with The One who loves them most.

My husband and I hiked Central Oregon, getting a firsthand take on what Dove would have faced. Experiences, such as trudging through ankle-deep ash in a forest recently destroyed by fires, helped me better portray the sensory details of Dove’s journey. Another pilgrimage we made was to Forks and La Push, Washington, which are the settings for Stephanie Meyer’s novel Twilight. Since we lived in Western Washington, visiting Forks was something we had to do before we moved out of state. We didn’t see any vampires, but the national forests couldn’t have been more beautiful!

I try to choose my characters’ names so they make sense as a group. For example, all the Christians in Dove Strong have names related to the Bible or nature, which makes sense because these Christians are off-the-grid survivalists. Thus, they ended up with names such as Dove, Micah, Stone, and Trinity.

I had a difficult time writing the scenes in which the unbelievers are acting sinful…such as when they are beating up Dove. I didn’t want to focus on that behavior too much in Dove Strong because my main focus is Dove’s personal growth, in which she discovers that she’s been hardhearted and closeminded, and she should be loving people who don’t know Christ. But at the same time, I had to try to depict a world in which those who don’t know Jesus are acting swayed by Satan.

My favorite childhood book—and still one of my favorite books—is Betsy Byar’s The Burning Questions of Bingo Brown. Actually, I’m in love with the whole Bingo Brown series; the books are just so funny! Betsy Byar’s characters are the best and especially Bingo. The guy is so relatable and is such a worrier. He agonizes that his arms won’t stop growing until they’re dragging on the ground. He panics that he doesn’t know how to stop holding hands with a girl without hurting her feelings and resigns himself to the fact that they’ll be awkwardly holding hands the rest of the day.

I would have to say the main characters come first. They sort of spring to life in my mind, and their dialogues begin to flow. I spend much more time carefully constructing and reconstructing my plots. It’s such a puzzle to make sure each piece fits while keeping everything unpredictable. Before I begin writing any story, I create a very detailed outline to prove to myself that the plot will work with no holes.

Thank you Erin, for letting us get to know you and your book better!

For Him and My Family, April 15

For the Love of Literature, April 20

To celebrate her tour, Erin is giving away the grand prize package of paperback copies of Dove Strong and its sequel Fanatic Surviving!!