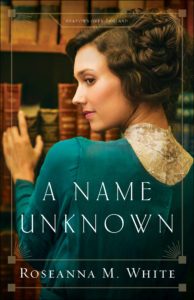 She’s Out to Steal His Name.

Will He Steal Her Heart Instead?

Rosemary Gresham has no family beyond the band of former urchins that helped her survive as a girl in the mean streets of London. Grown now, they are no longer pickpockets—now they focus on high value items and have learned how to blend into upper-class society. Rosemary’s challenge of a lifetime comes when she’s assigned to determine whether a certain wealthy gentleman is loyal to Britain or to Germany. How does one steal a family’s history, their very name?

As Europe moved closer to World War I, rumors swirl around Peter Holstein. Awkward and solitary, but with access to the king, many fear his influence. But Peter can’t help his German last name and wants to prove his loyalty to the Crown—so he can go back to anonymously writing a series of popular adventure novels. When Rosemary arrives on his doorstop pretending to be a well- credentialed historian, Peter believes she’s the right person to help him dig through his family’s past.

When danger and suspicion continue to mount, though, and both realize they’re in a race against time to discover the truth—about Peter’s past and about the undeniable attraction kindling between them.

I very much enjoyed  this story. I love the historical settings of the novel and how Roseanna did her research. She has a certain talent for storytelling and I have a certain talent for “losing” myself in her  books. I did enjoy meeting new people and making new friends with the characters in the book.

I liked Rosemary and I didn’t. I like her because she had a way of bringing out the truth in oneself and others. “Everyone tells lies”, she said. I didn’t really like how she went about certain things and ways. I liked her because she had guts to do what needed done.

Peter is a different story. I think he is or has a mysterious side  to him.(I didn’t want to give much away). I liked how Rosemary overlooked his stuttering and “worked” with him in his library. I’ve always wanted to be a librarian. I think I would be in hog heaven with a library like Peter Holsteins. I could imagine myself getting lost in this particular library.

All in all, I thought this was a fabulous book.  I love to “time travel”.

I received this book for free. These are my own words and no compensations were received.

Roseanna M. White pens her novels beneath her Betsy Ross flag, with her Jane Austen action figure watching over her. When not writing fiction, she’s homeschooling her two children, editing and designing, and pretending her house will clean itself. Roseanna is the author of over a dozen historical novels and novellas, ranging from biblical fiction to American-set romances to her British series. Spies and war and mayhem always seem to make their way into her novels…to offset her real life, which is blessedly boring. You can learn more about her and her stories at www.RoseannaMWhite.com.

It’s always a challenge to make a historical setting authentic—especially when it’s set in a region you’ve only ever read about. As I was writing A Name Unknown, I learned so much about Cornwall—all the more when I had the opportunity to visit the gorgeous Penzance region while the book was still in edits! I quickly learned that I had far too many trees in my story, and hadn’t quite captured the uniqueness of the coastal setting. I dove into rewrites with excitement and gusto, ready to make my fictional Cornwall more like the real one.

Delving into this rich region and its history was a blast! And I’m so excited to get to share the culture of Cornwall—and a taste of their unique flavors—with you. In a special Celebrate Lit giveaway, I’ll be offering not only a signed copy of my book, but also some homemade ginger fairings! Here’s the recipe I used . . . after special ordering the Mixed Spice (reminiscent of pumpkin pie spice) and Golden Syrup (a thick syrup with a bit of a toffee flavor) from Amazon. 😉 (I have a gram scale so did use the weight measurements rather than volume—also, English teaspoons and tablespoons are a bit bigger than American, so I heaped them, and I turned out deliciously.)

In a small saucepan, warm the golden syrup until it’s clarified a bit; stir into the flour mixture until a dough forms. Roll the dough into walnut sized balls and put on prepared baking sheets a few inches apart.

Bake 8-10 minutes, until golden. Cool a few minutes on the trays and then transfer to a cooling rack. 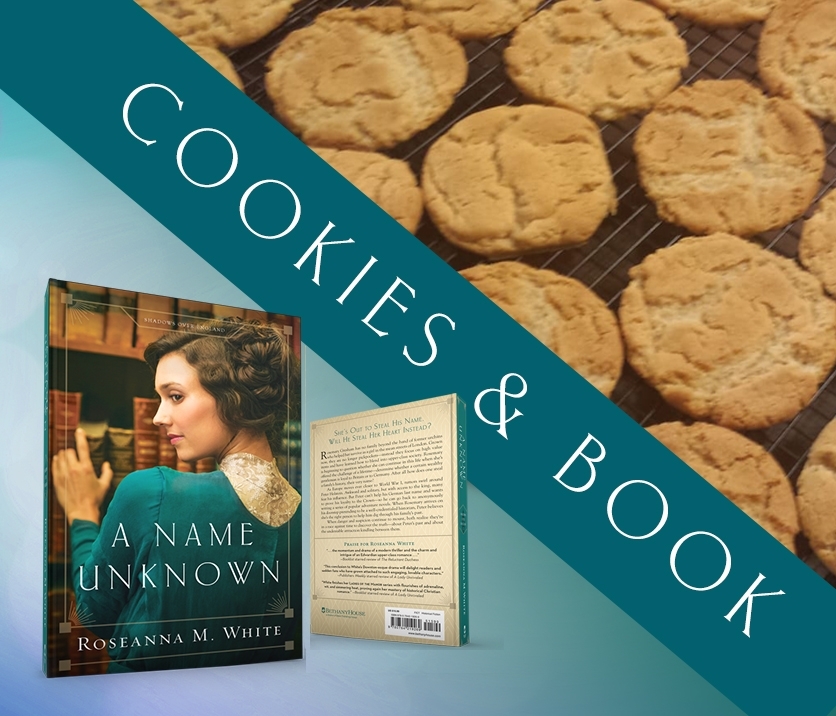 To celebrate this tour, Roseanna is giving away a grand prize of a paperback copy of A Name Unknown & 2 dozen cookies from Roseanna!!! Click below to enter. Be sure to comment on this post before you enter to claim 9 extra entries! https://promosimple.com/ps/bc0e