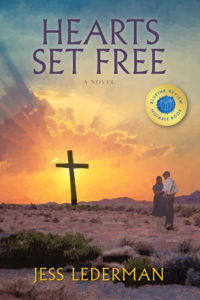 “Bold and forthright writing that would set any heart on fire.”–Christian blogger Miranda A. Uyeh

“Readers of inspirational fiction will love this moving story that affirms the power of God’s mercy.”
–Publisher’s Weekly

In 1930, the rag-tag riffraff of a railway stop called Las Vegas need a fighting man to shepherd their tiny church after their pastor is murdered. Might David Gold, a washed-up boxer and Bible-school dropout who fights as the Pummelin’ Preacher, be the answer to their prayers?

At the same time, Luke, a native Alaskan boy, is on a quest to find his father, who has abandoned his family for a beautiful woman his warrior mother vows to kill. The journey of mother and son will lead them to the Nevada desert, and to truths–and terrors–of which they’d never dreamed.

In 2011, Science Cable T.V. producer Tim Faber is determined to prove that mankind has no need of God, while his lover, Joan Reed, strives to regain the faith of her youth. They’re bound for Las Vegas to meet with a 99-year-old man who holds the key to a mystery they must solve–and answers that will forever change their lives.

Their stories will come together at a little house of worship known as the Church of the Heart Set Free. 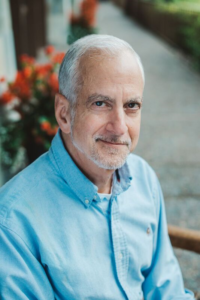 After I graduated with a degree in music from Columbia University, a lust for expensive pianos drew me into an unexpected career in finance. It turned out that I had a knack for business; I gained much that the world had to offer and became a hedonist, a gambler who haunted the poker rooms of Las Vegas, and an arrogant atheist. I’ve written fiction for most of my life, and at one point I quit work to devote myself to writing a novel. During that time, my late first wife, Teri, and I lived in Paris, down the street from where Hemingway once lived, and later in the mountains of Idaho. But the novel was never published, for I was a man whose soul had not yet awakened, who did not yet have anything important to say. So I went back to the business world.

One day, when we were living in Dallas, Teri heard a radio interview with Francis Collins, an eminent scientist who wrote The Language of God, which tells the story of his journey from atheism to becoming a disciple of Christ. Collins’ book led us to the writings of C.S. Lewis and George MacDonald*, who became the midwives of our rebirth from above.

There’s no hiding from the Hound of Heaven, once He’s on your trail!

Several years later, Teri was diagnosed with ALS (Lou Gehrig’s Disease) and we left Dallas and the business world behind and moved to a small town in Alaska. There we looked out on the glory of God’s creation and read to our heart’s content during the last two years of her life. Faced with tragedy, we learned to trust utterly in Him, and He blessed us with the peace that surpasses all understanding.

It was after Teri’s death, while I was still living in the far north, that the idea for Hearts Set Free—which opens in the Alaska Territory in 1925—was born. People who know that the novel contains autobiographical elements (and several historical characters) sometimes ask me, “How much of the story is true?’ And I answer, “Perhaps twenty percent—and the rest is even more true!” What drives my writing is the desire to convey truths that transform lives. Truths of the heart.

In 2013, I met a wonderful woman—my current wife, Ling—and soon we began talking about having children. “Impossible!” said our doctors. “According to your test results, there’s no chance at all, even using the latest techniques.” Of course, within two months of that pronouncement, Ling was pregnant with little David, who just turned three, and we subsequently adopted Daniel, who’s now twelve.

After David’s birth, we moved to southwest Washington. I’m currently at work on a novel set in Las Vegas in 1955, and, when I’m not writing or chasing my sons around, can usually be found at the piano playing Chopin nocturnes for Ling.

I first conceived of Hearts Set Free in the far frozen north, not long after my first wife, Teri, passed away. She had been diagnosed with ALS, an invariably fatal disease, when we were living in Dallas, and within a month we decided that I’d quit my job so we could move to a small town in Alaska. We bought a small house based on the view out of the living room windows; there we’d be able to spend the time she had left in peace, and gaze out at the glory of God’s creation.

Teri—a woman who untiringly searched for truth—was the inspiration for Joan Reed, one of the main characters in the book, and Alaska—the Last Frontier!—entered into the story as well. We were living not far from the headquarters of the Iditarod, the iconic thousand-mile dog sled race that takes place each year. The Iditarod was modeled after an amazing race against time which occurred in the icy darkness of an Alaskan winter in 1925, when dogsled was the only way to get diphtheria serum to the remote town of Nome and save ten thousand lives. Hearts Set Free begins with that dramatic event.

I put a lot of myself—the bad along with the good!—into other characters in Hearts Set Free. Up until I became a Christian, I had all of the arrogant narcissism of atheist Tim Faber, a T.V. producer intent on proving that mankind has no need of God. I also have the questioning spirit of David Gold, a Bible-school dropout turned boxer who is led by the Lord to become a heroic pastor, and of young Luke Noongwook, a native Alaskan who goes on a quest to find his missing father. Their need to understand difficult aspects of Scripture are based on a passionate desire to love God with all their heart and strength and soul and mind. As is mine!

As a young man, I’d been greatly impressed by E.L. Doctorow’s novel Ragtime, which blended fictional and historical characters, and I decided to use the same approach in Hearts Set Free. Parts of the novel are set in the early and mid-1900s (especially the 1930s), and Jack Johnson, the first black heavyweight champion of the world, and Georges Lemaitre, who was both a physicist and a priest—a man who corrected Albert Einstein, and is probably the greatest scientist of whom most people have never heard!—play important roles.

Finally, the novel is tribute to the beauty of Scripture and features many quotes from the Psalms. If you love compelling tales that combine mystery, adventure, and romance, and enjoy thinking deeply about your faith, I think you’ll find it’s just the book for you!

What’s your favorite under-appreciated novel?
This is a tough one, because there are several of George MacDonald’s novels that fit this category (for more about him, see Q.8 below), but if I had to pick one it would be Thomas Wingfold. It’s a wonderful story about a 19th-century pastor who has to discover and come to terms with what being a Christian really means.

What was your hardest scene to write?
In some ways, it was the last chapter, the novel’s epilogue. It’s the longest chapter, because there was a lot I wanted to let the reader know about, and the hardest decision I had to make was to cut out nearly half of what I had originally written. Including some very cool material! But it had to go!

What is your favorite childhood book?
Two of the first books I read were A Child’s History of the World and A Child’s Geography of the World. They awakened in me a sense of wonder that I’ve never forgotten and never lost. It’s been decades since I had the original editions, but I purchased copies online not long ago. Hopelessly dated and politically incorrect in this day and age, but enchanting nonetheless.

Who is the author you most admire in your genre?
Among writers of what I would call Christian literary fiction, George MacDonald would be at the top of the list. He was a Victorian-era minister, novelist, and poet and the great inspiration to C.S. Lewis, who referred to him as his “master.” MacDonald was also a great influence on G.K. Chesterton, Madeleine L’Engle, and countless others. Reading his novels is one of the best ways of discovering what it means to follow Christ.

What do you like to do when you are not writing?
Aside from chasing after my four-year-old son, that would have to be playing the piano! I’m especially a fan of Beethoven, Chopin, Brahms, and the Blues. And for me, music is often an inspiration for my writing. Sometimes I’ll hear a melody or harmony and think, yes, that is just what I want to express, if only I can find the right words!

Thank you Jess for you time to let us get to know you better!

For the Love of Literature, February 21

For Him and My Family, February 27 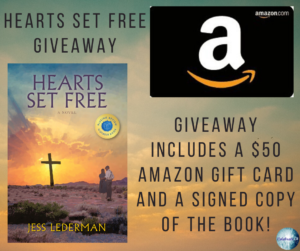 To celebrate his tour, Jess is giving away the grand prize package of an autographed copy of Hearts Set Free plus a $50 Amazon gift card!!