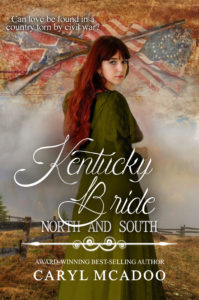 A Country Divided…And so is her heart.

Some might say you can’t be too fussy when almost every unattached young man is off fighting for Southern freedom, but that shouldn’t mean a rebel’s daughter has any business with a Union soldier. Forbidden love never created greater battles than Gigi’s unexpected love for a Union soldier.

A dashing Rebel Soldier. The daughter of a Federal Soldier. How will they overcome the odds and a war to be together? Find out in this twist on Romeo and Juliet.

Kentucky Bride by Caryl McAdoo is the eight book in the North and South series, a series that has 36 books set during the Civil War. It is a Christian Historical Fiction set in 1861 Kentucky. In this book Gigi, like many other women around the country, were left behind to care for their homes and family businesses while boys and men went off to war.

The story does have two slaves, Bo and Daisy, the book speaks of them more as family members or employees rather than slaves.

McAdoo has a gift for writing so I always know that I am in for a treat when I read one of her books. With realistic characters and descriptive writing she has a way of making her story come to life . This is a story of love at first sight, from a character that does not believe in it until it happens to her. Gigi was young, but felt her choice of men and chances at love were limited. She however was a hard worker and determined to help make life easier on her aging Grandfather after her Father and brother joined the Federal army. I enjoyed the relationship between Gigi and Gramps.  Ephraim, a Texas Ranger is only on the side of the Confederates because of his loyalty to the Rangers.  I enjoyed seeing Gigi and Ephraim’s relationship develop and understand how things can happen quicker in times of war, even if I don’t understand love at first sight.  I hope that Daisy and Bo’s story is one that I will get the opportunity to read. I highly recommend this book to any historical fiction fans! 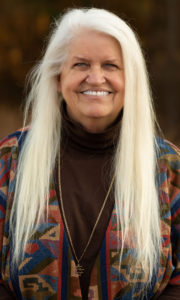 Award-winning author Caryl McAdoo prays her story brings God glory, and her best-selling stories—over fifty published—delight Christian readers around the world. The prolific writer also enjoys singing the new songs the Lord gives her; you may listen at YouTube. Sharing four children and eighteen grandsugars with Ron, her high-school-sweetheart-husband of over fifty years, she lives in the woods south of Clarksville, seat of Red River County in far Northeast Texas. The McAdoos wait expectantly for God to open the next door.

It thrilled me to be a part of the North and South Collection series, a thirty-seven titles by seventeen authors project headed up by Christine Sterling Bortner. One reason is that my husband and co-writer has always been a Civil War buff, and the other because it’s such a huge undertaking. I’m actually writing two titles, Kentucky in 1861 and Nevada in 1865.

The stories are broken up by the years (1861-1865) and then the years divided into the states or territories (37 in all) as to when its most major event happened. So, if a reader stays with the series, one releases every other week, they will enjoy a chronological overview of the Civil War.

This story, Kentucky Bride is set near Bowling Green where the Confederates first set up their area headquarters. Twenty-thousand men descended on the city of seven hundred. Nearby, General Hindman with fifteen hundred men that included the 8th Calvary Regiment from Texas, a group of Texas Rangers who’d joined the effort. Of course, I had to have a Texan as a hero! 😊

My heroine is eighteen-year-old Gardenia Gladiola Garland who helps her grandfather in the family business as her papa, brother, and uncle were gone. They’d joined the Union Army several weeks before. She hates the flowery name her mother pinned on her almost as much as the war and insists on being called Gigi.

My Texas Ranger hero, Ephraim Edward Kerns is sent to meet a supply wagon and it surprises to find such a lovely young woman muleskinning. He ties his horse to the back of the wagon and takes over for her, falling in love with her intelligence, beauty, and determination practically at first sight.

This Texas author hopes readers will love these two young ones, and I’m always “Praying my story gives God glory!”

For Him and My Family, July 12

For the Love of Literature, July 14

To celebrate her tour, Caryl is giving away the grand prize of a $25 Amazon Gift Card!!