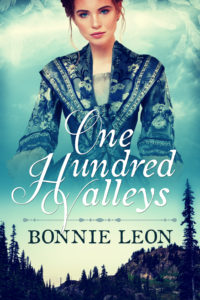 After the death of her mother, Emmalin Hammond discovers she is not the heiress she’d always assumed she’d be. The revelation exposes her fiancé true intentions when he withdraws his marriage proposal, leaving Emmalin heartbroken and humiliated. When she discovers the father she believed to be dead is still alive and living in the Oregon Territory she decides it is time to meet the man who has been hidden from her all of her life.

Accompanied by her Uncle Jonathon she sets out for the Oregon Territory in search of answers and hoping for a renewed relationship with her father. When tragedy strikes, she confronts the terrifying challenge of completing her quest alone. Faced with few options, she entrusts her life to a mountain man named Jacob Landon who agrees to transport her to a small settlement in Southern Oregon called Deer Creek, a place also known as the Land of One Hundred Valleys.

Emmalin is not prepared for the hardships of life in the Oregon wilderness. Each day presents a new challenge. Newfound friends, including the reserved Jacob Landon, come alongside to help her adapt and she gradually finds her way. Yet, she feels out of place. Should she brave the arduous journey back to Philadelphia and the life she once knew or remain and hope for something better in the Oregon wilderness?

What I think you should know:
One Hundred Valleys is historical fiction by Bonnie Leon. It is set in Oregon Territory in 1855. When Emmalin Hammond’s life as she knew it is unexpectantly ripped out from under her she undertakes the journey west to find the father she long thought dead.

What you might need to know:
Jacob Landon came to Oregon with his missionary family, however when they tragically died he was raised by local Native Americans. During the book the government has started forcibly moving Native People to reservations. Some of this is shown in the book and Leon does try to show the harsh reality of this in a reader friendly way.

What i thought about this book:
Emmalin was raised as a pampered society lady, but when her parentage is revealed and she loses the people who she thought she was friends with she finds her true worth. I love her spunk and grit, in spite of her upbringing she is will and able to try new things. Yes at times she is selfish and winey, however if I had just lost everything I knew I would be too! Jacob was a wonderful character, I love how he is loyal to both his faith and his Native family. . Leon has written an interesting with captivating characters who I loved and would love to read more about specifically Charity! 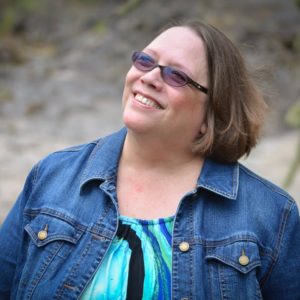 Bonnie Leon is the author of twenty-two novels, including the recently released Return to the Misty Shore, the popular Alaskan Skies and bestselling The Journey of Eleven Moons. Bonnie’s books are being read internationally and she hears from readers in Australia, Europe, Poland, and even Africa. She enjoys speaking for women’s groups and mentoring up and coming authors.

Bonnie and her husband, Greg, live in Southern Oregon. They have three grown children and seven grandchildren.

In the spring of 1980 my husband and I, our two-year-old son, and our infant daughter left city life in Washington state and moved to Southern Oregon. We gave up our community of friends and family along with my husband’s reliable and well-paying job. Our friends thought we were crazy, but we were determined that Oregon was where we belonged. We were scared but not deterred.

I think the change in my own life as a young woman had a lot to do with why I wrote this story of Emmalin Hammond. To be sure, Emmalin’s level of difficulty and danger is distinctly different than mine, but there are similarities. We both experienced adventures, joy, and, yes, even danger.

Oregon has been my home for forty years now, and I am glad my husband and I made the decision to move here. We’ve had a good life in this wild and beautiful country. Sometimes I wonder about the women who made that choice during the nineteenth century. Emmalin set out on her harrowing journey to Oregon in the spring of 1855. Many who began that journey did not make it across the plains and desserts of America.

When I put down roots in Douglas County, Oregon I was thrilled to be here, but the changes weren’t all easy. The old farmhouse we lived in had more broken windows than intact ones. It was mouse infested. The plumbing needed major repair. And yet I loved it. The countryside was lush and green, and the rolling hillsides were dotted with farm animals, wildlife, and broad-limbed oak trees. There were wild blackberries sprawling along the farm’s fences and fresh fruit in our orchard. It looked much the same as the Oregon Emmalin discovered in my story, One Hundred Valleys.

I loved hard work and spent a lot of time splitting logs for our only heat source—a wood burning stove—felling trees on our new property, and working alongside my husband in our vegetable garden.

I had run-ins with things like poison oak and skunks, but that did not dampen my enthusiasm as a new Oregonian. I loved picking wild blackberries, fishing the high mountain lakes, hiking mountain trails, and fishing the North Umpqua river. I cherished those days as a farm wife and mother. Those were the best years of my life. I have never regretted our move to the beautiful land of one hundred valleys in Southern Oregon.

I am thankful for the early explorers who challenged the wilderness in the Oregon Territory more than a century ago. It is their courage and determination that made it possible for me and my family to live and thrive in this beautiful place.

Through the Lens of Scripture, April 15

Reading Is My SuperPower, April 16

For Him and My Family, April 17

To Everything There Is A Season, April 22

Through the Fire Blogs, April 24

For the Love of Literature, April 26

With a Joyful Noise, April 28

To celebrate her tour, Bonnie is giving away the grand prize package of a $15 Amazon Gift Card and Vintage Oregon myrtle wood porringer bowl!!