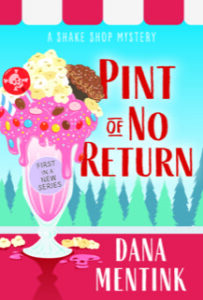 Book:  Pint of No Return

The first in new dessert cozy mystery series! A murder in town is bound to shake things up…

After her divorce from her thrice-married embezzler husband, Trinidad Jones is finally ready for a fresh start. So when she’s left one of ex’s businesses in Upper Sprocket, Oregon, she decides to pack up her dog, cash in her settlement, and open her dream business: the Shimmy and Shake Shop, introducing the world to her monster milkshakes. And even with a couple sticky situations underway, namely that the other two ex-wives also call Sprocket home, Trinidad’s life seems to be churning along smoothly.

That is, until she discovers her neighbor, the Popcorn King, head down in his giant popcorn kettle. When one of Trinidad’s fellow ex-wives is accused of the murder and Upper Sprocket descends into mayhem, it’s going to take a supersized scoop of courage to flush out the killer.

He had already been consulted on a pup-friendly shake she’d dubbed the Chilly Dog, determining it to be more than passable. Noodles was an encouraging sort, which made her doubly glad she’d decided to adopt a senior citizen companion six months earlier instead of a younger pup. Besides, he had a wealth of skills she was still discovering.

Carlos whistled, running a hand through his spiky hair, sending it into further disarray. “It’s like a Fourth of July freakshake.” He gripped the pink coated paint roller he was holding as if it was a Roman spear. “Like, an eighth wonder of the world, or something. You should put a sparkler on the top, you know, for the holiday. People would dig that.”

Diego shook his head. “Bad move. Those things can burn at two thousand degrees Fahrenheit, depending on the fuel and oxidizer. Of course, temperature is not the same as thermal energy which is going to relate to the mass so…”

“Dude,” Carlos said, punching his brother’s arm. “You’re such a dweeb. I mean, turn off your bloated brain and just admire it, wouldja?”

Diego ceased his impromptu physics lecture to join his brother in their mutual appreciation fest.

You can get your copy here! 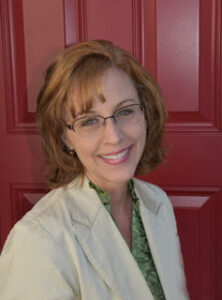 Dana Mentink is a two time American Christian Fiction Writers Carol Award winner, a Romantic Times Reviewer’s Choice Award and a Holt Medallion winner. She is the Publisher’s Weekly bestselling author of over forty titles in the suspense and lighthearted romance genres. She is pleased to write for Harlequin’s Love Inspired Suspense, Harvest House, and Poisoned Pen Press. Besides writing, she busies herself teaching third grade. Mostly, she loves to be home with Papa Bear, teen bear cubs affectionately nicknamed Yogi and Boo Boo, Junie, the nutty terrier, and a chubby box turtle. You can connect with Dana via her website at danamentink.com, on Facebook, YouTube (Author Dana Mentink) and Instagram (dana_mentink.)